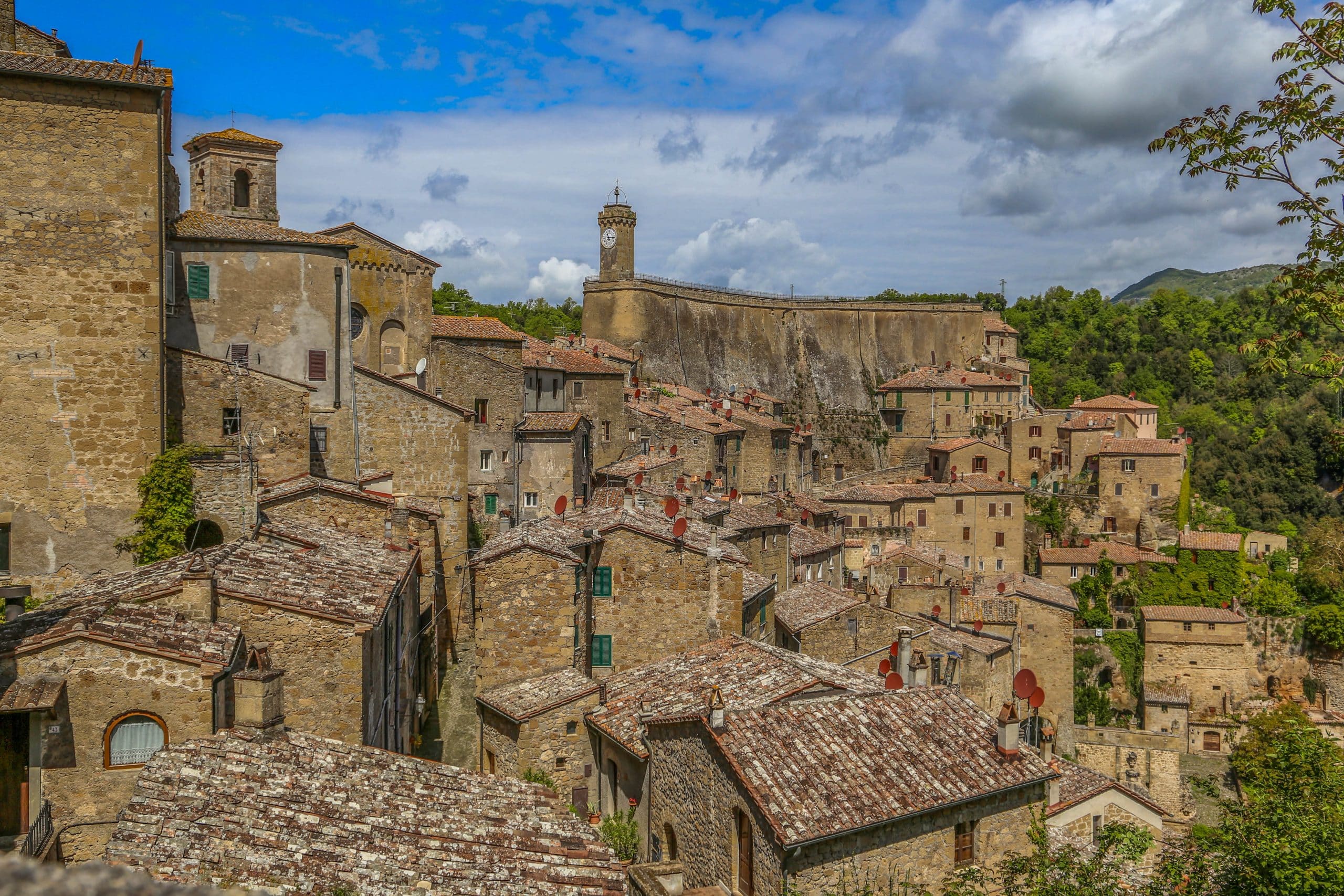 Known as the Matera of Tuscany, the tufa city of Sorano is a treasure chest of history and nature.

Rising on a cliff of tufa rock overlooking the narrow valleys below, the village of Sorano (Tuscany, Italy) was founded in medieval times as a fief of the noble Aldobrandeschi family, but the territory tells a story that dates back to much further. It was inhabited as long ago as Etruscan times as shown by the many settlements, excavated roads and necropolises found in the area.

Sorano is located in the so-called Area del Tufo, this splendid part to the south east of the Grosseto Maremma area bordered to the north by Mount Amiata and to the south by the Lazio region, characterised by the presence of tufa rock which is very easy to work and light. Together with Sovana and Pitigliano they make up the three famous Città del Tufo (Tufa Cities).

The hilltop village winds along picturesque alleys, homes and handicraft shops, overlooked by the stately Masso Leopoldino; you can enjoy a beautiful view over the village and the surrounding nature from the terrace of this ancient fortified structure which, together with the 14th century Fortezza Orsini, represented Sorano’s main defence system.

An extraordinary example of military architecture, you cannot miss the chance to visit the Fortezza Orsini, home to the interesting Museum of the Middle Ages and the Renaissance and a series of underground ramparts discovering the labyrinth that runs below the village.

The area outside of Sorano is full of sites of important archaeological, historical and natural value; the Città del Tufo Archaeological Park has opened them to the public and stretches out to the adjacent areas of Sovana and San Quirico, where you can find the “lost city” of Vitozza.

Just a few minutes by car from Sovano’s historical city centre, you can find the rocky settlement of San Rocco, which is open to the public for free.  Named after a small chapel dedicated to the saint, the area also features a natural terrace with a spectacular view over the village of Sorano. Immersed in the greenery, it is the departure point for trekking itineraries: from here you can go off to discover flourishing nature, primitive caves, tombs half-hidden in the plants and the impressive excavated roads – part of the ancient Etruscan communication network dug into the tufa and characterised by the steep walls on the side of the road that can reach up to 20 metres in height.

The route following the San Rocco excavated road starts just behind the San Rocco church, descends to the River Lente valley and in around twenty minutes leads to the ancient entrance to Sorano – the Porta dei Merli, at the very foot of the Masso Leopoldino.

With walks among the most fascinating parts of history and excellent places to eat in the historical centre, Sorano also offers moments of pure relaxation. Just four kilometres south of the village you can find hot springs that have been used since ancient times: the Terme di Sorano can be enjoyed in a very pleasant spa and are part of a wider thermal waters context made famous by the nearby hot springs of Saturnia.

WHAT TO SEE IN SORANO, TUSCANY (ITALY):